Find a picket line like @afa_cwa member @monica_sundseth did on her HNL layover. The industry made $550B last year & Marriott is the biggest, but workers don’t make enough to get by. #1Job should be enough! This @unitehere strike is our strike too. #1u https://t.co/Poi8pNlEFp pic.twitter.com/fUwEl6Oc27

Father Clete Kiley helped get our strike message into a newsletter of 15,000 priests

I stand with the Marriott workers fighting for safe working conditions and a living wage. Marriott made $3.4 billion in…

Workers leafleted UBS, the owner of the Baltimore Waterfront Marriott where workers have demanded a fair process to join a union.

And if you direct your attention out of the cabin window, you'll see #1job should be enough!@Marriott can't even hide in the sky! https://t.co/DMEfGnbIkl to learn more. https://t.co/Zdd3x70a09 if your travel is impacted.https://t.co/2X51zv1RPD to switch#MarriottStrike #1u pic.twitter.com/6nM3kAjcg5 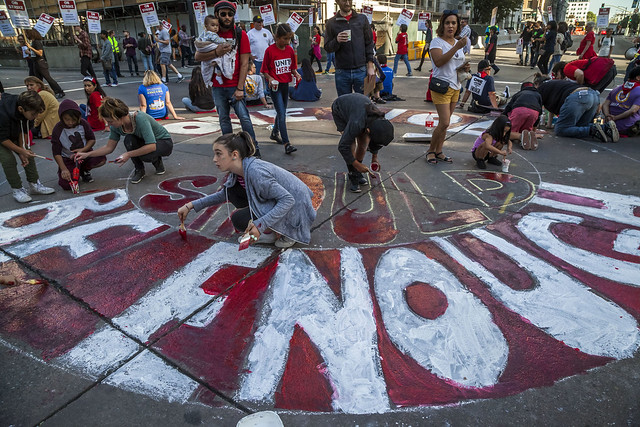 Read some of our latest national strike news, from City Lab

“The tagline that unifies [8K striking Marriott workers] —“one job should be enough”—speaks to the wide scope of their goal.”@ptsarahdactyl reporters on the #MarriottStrike for @TheAtlantic’s @CityLab #1job #unitehere #1uhttps://t.co/xAlI10cdno

San Francisco’s Democratic Socialists include ear plugs in care packages to strikers because our picket lines are so spirited!

If you want to help fund more food deliveries and care packages in the coming weeks, you can donate to our solidarity fund here: https://t.co/tkOKpCqdbY

One job should be enough. Our cost of living in Hawai’i is so high, most people work 2-3 jobs just to make ends meet. This is unacceptable. I’m proud to stand with our hard-working men and women as we fight for a living wage. #1job @uniteherehawaii @Marriott pic.twitter.com/y3qTHBvu1T

Yesterday, Local 5 members on strike rallied on the beach at the Sheraton Maui Resort & Spa and disrupted the Hawaii…

“I want to send a message to [@Marriott], I stay in your hotels not because you’re special, but because your WORKERS are special…on behalf of the @AFLCIO,…we are 100% behind the workers!” – @Tefere_Gebre, Exec VP AFL-CIO. #MarriottStrike #1Job @WestinGaslampSD pic.twitter.com/QFAMKHQ8sN

Dodgers players and employees are the latest to cross hotel picket lines in Boston https://t.co/2Zex3GPgO3 via @sbnation #marriottstrike #1job

From strikers to students, we are reaching out to customers of our hotels to ask that they respect us and do not cross our lines

Major conference moves, and the event organizer tells the San Francisco Chronicle he doesn’t regret it

As a strike by 2,500 Marriott hotel workers in San Francisco approaches its fourth week and the giant Oracle Openworld conference begins, the bills are adding up for businesseshttps://t.co/tIFigUj6zJ

Welcome to the #GIArts Conference! In light of the Marriott International employees at the Oakland Marriott City Center going on strike, @eddietorres2001, GIA president, kicks off the #RaceSpacePlace Conference addressing how we redesigned our event in solidarity with workers. pic.twitter.com/b61k0cpFB9

This huge conference of online video makers is getting the word from one of their own that the San Jose Marriott is on strike!

Workers at the San Jose Marriott connected to the TwitchCon facilities continue to strike and today posted the following notice regarding TwitchCon.

Protests there are expected throughout the weekend. https://t.co/DAoQWuMNOj

It's not only this Marriott. It now spans 8 cities.

More from this location: https://t.co/2JVwkd0OLv